Deprecated: Methods with the same name as their class will not be constructors in a future version of PHP; WP_Widget_Factory has a deprecated constructor in /home/mhuddelson/public_html/pension360.org/wp-includes/widgets.php on line 544
 A Caisse of Outrageous Compensation? | Pension360
Skip to content

Below, I translate the key takeaways:

Now, let’s go over the main tables going over compensation, starting with table 41 on page 103 of the Caisse’s 2016 Annual Report (click on image): 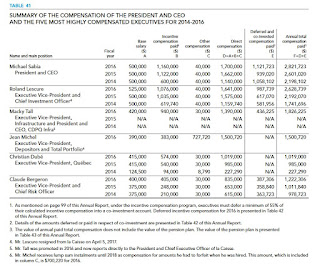 In order to understand these figures, it’s important to carefully read the Report of the Human Resources Committee which begins on page 93 of the Annual Report. La Caisse’s employees receive total compensation based on four components: 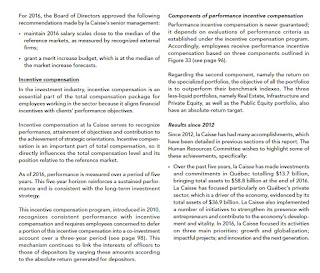 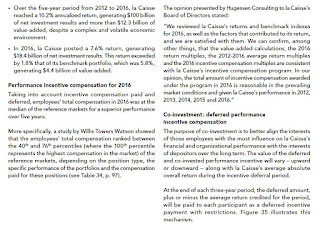 Below, I embed an extract from page 100 of the Caisse’s 2016 Annual Report discussing Michael Sabia’s compensation (click on image): 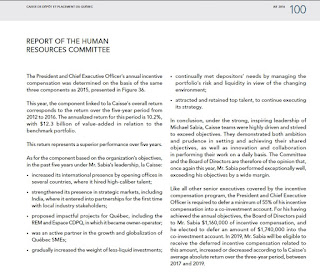 And below is figure 36 which goes over the performance components of the President and CEO’s total compensation (click on image): 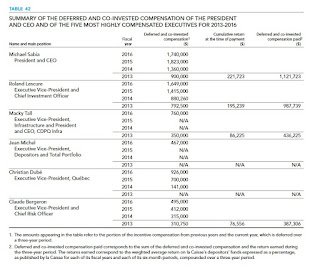 Tables 43 and 44 below provide the pension summary and severance for the president and five most highly compensated executives at the Caisse (click on images): 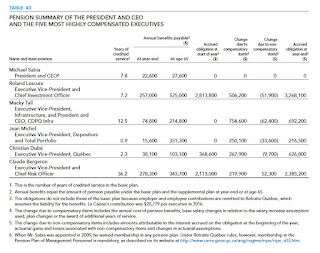 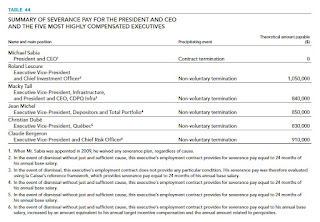 Table 45 below provides details of the reference markets used to reference the compensation of the president and five most highly executives of the Caisse (click on image): 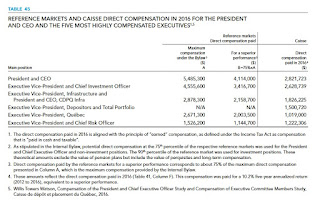 Make sure you read the footnotes to these tables to understand how compensation is determined.

The reference markets used for the CEO and executive VPs and non-investment positions used for referencing compensation are provided in tables 37, 38, 39 and 40 below (click on images): 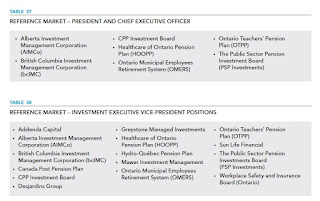 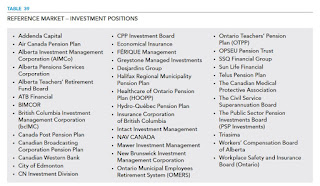 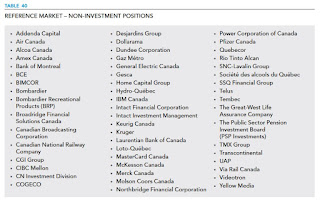 As you can see, I provided you with a thorough discussion on how exactly compensation is determined at the Caisse. The key points are that the incentive plan is based on five-year returns and a significant portion of incentive compensation for senior executives and for employees is deferred (at the end of each three-year period, the deferred amount, plus or minus the average return credited for the period, will be paid to each participant as a deferred incentive payment with restrictions).

[Note: Read my comment going over the Caisse’s 2016 results.]

Obviously, any layperson, teacher or public sector employee looking at these figures and reading articles in the Journal de Montréal will think the Caisse’s top executives are extremely well compensated.

And no doubt, they are, and total compensation has increased over the last few years but it’s based on long-term performance and added-value over a benchmark (over the last five years) and is in line with what the Caisse’s peer group doles out to its senior executives and investment professionals.

It’s been a while since I last went into a full discussion on compensation at Canada’s large public pension funds. Over two years ago, I discussed a list of the highest paid pension fund CEOs  but I need to do a more thorough job of going over compensation to explain in great detail how it’s determined and why it’s important in terms of attracting and retaining top talent to do a job that is arguably far more important and difficult than most people realize.

Michael Sabia is paid very well but he’s the President and CEO of the second largest pension fund in Canada, he and his senior executives have delivered on long-term performance targets and his job is arguably a lot more difficult than that of his peers because there is a political dimension to it which quite frankly is daunting at times (for example, he recently appeared in front of Quebec’s National Assembly to defend the Caisse’s investments in companies that are registered offshore, which by the way most funds that pensions invest in are registered in!).

As for the rest of the Caisse’s top executives, they too are paid well but in line with their peer group (and even below) and it’s important to understand they have huge responsibilities and very difficult objectives to achieve.

Lastly, one person who is missing from this list is Daniel Fournier, the Chairman and CEO of the Caisse’s real estate subsidiary, Ivanhoé Cambridge (click on image):

Mr. Fournier is also a member of the Board of Otéra Capital, a CDPQ’s subsidiary specialized in commercial real estate financing and for which he is responsible. He reports to his own board, not Michael Sabia.

There are no public reports going over compensation at Ivanhoé Cambridge but given that real estate is the most important asset class at the Caisse, and that long-term performance has been stellar in this asset class, I wouldn’t be surprised if Daniel Fournier gets paid even more than Michael Sabia (just a guess here but he has huge responsibilities).

Anyway, these are my comments on compensation at the Caisse. Just like in other large shops, the top executives make the most because they have the most responsibility.

This comment is to provide many of you with more details on how compensation is determined at Canada’s second largest pension fund and if you go over the annual reports of other large Canadian pensions, you will find a similar thorough discussion on compensation.

Once again, if you have anything to add, feel free to email me at LKolivakis@gmail.com.