Deprecated: Methods with the same name as their class will not be constructors in a future version of PHP; WP_Widget_Factory has a deprecated constructor in /home/mhuddelson/public_html/pension360.org/wp-includes/widgets.php on line 544
 angel taveras | Pension360
Skip to content

Sometimes, a pension plan’s official funded ratio can be deceptive. That’s because there are many different assumptions that play into that final number, including the fund’s assumed rate of return.

Michael G. Riley, vice chair at Rhode Island Center for Freedom and Prosperity, has done some number-crunching to see what Providence’s pension funding would look like if the city lowered it’s return assumption, which currently stands at 8.25 percent.

The results of the analysis can be seen in the table above. Riley’s methodology can be read below. From Go Local Prov:

I have calculated the TRUE pension liability given certain relevant assumptions. Let me first say that if Bondholders did not currently have first lien on Tax revenues, due to a 2011 law passed by the assembly placing public workers and taxpayers at the end of the line, then Providence, Rhode Island would already be rated “junk” by Moody’s, S&P etc. and would have very little flexibility to finance anything.

Mayor Taveras uses among the highest discount rate in the country 8.25%. Moody’s will use and analyze using between 5.5% and 6%. We will use 6% for their analysis and a blended rate based on crossover points indicating 70% muni rate and 30% the providence assumption for returns. The 2012 CAFR is used and assets were then reported as $421 million dollars ( even though assets in the fund were only $247 million) First we will adjust assets down by $57 million based on the auditors admonition against Taveras accounting gimmick, next we will use market value as prescribed by gasb 67.

This table reveals the truth through analysis, if you want to believe Taveras lies then keep reading the Projo and WPRI. If you are an accountant or actuary including those employed by Providence please refute these numbers in public.

According to NASRA research, the average pension fund in 2013 assumed a rate of return of 7.72 percent.

Amidst all of the pension sparring going on in the Rhode Island governor race, one question recently came to the forefront: Which candidate more effectively managed their respective pension system?

In a recent debate (the video of which can be seen above), Raimondo made the claim that Taveras did very little to improve the health of Providence’s pension system since he’s been in office.

“The pension fund in the city of Providence is only 30-percent funded, about the same level as when he [Taveras] took office,” she said at the debate. “[I] fixed a system for the long term. He made small changes and the pension system in Providence is still in crisis.”

But is that claim true? PolitiFact checked the facts.

We asked the Raimondo campaign for its evidence.

Spokesman Eric Hyers sent us links to two documents. The first was a Jan. 19, 2012 report from Providence’s pension adviser, Buck Consultants, which tracks funding going back to 1994, when the city had 57.4 percent of the pension money it needed.

Since then, the overall trend has been down. The funded ratio had plummeted to 39.3 percent by the last full fiscal year Vincent A. “Buddy” Cianci Jr. was in office. It had dropped to 34.1 percent by June 30, 2010, when David Cicilline, now a U.S. representative, was in his last year.

A year later, when Taveras had been in office for six months, the funded ratio had dropped to 31.94 percent.

The second document was the Jan. 31, 2014 valuation report by the city’s new pension adviser, Segal Consulting.

It reports that as of June 30, 2013, with Taveras in office two and a half years, the funded ratio was virtually the same — 31.39 percent. And this was after Taveras won union concessions to reduce pension costs.

But PolitiFact also contacted the Taveras campaign to hear their side of the story.

Michael D’Amico, Taveras’ former director of administration who is now a budget consultant for the city, said it was “a complete oversimplification” to imply that the changes were small because the funded ratio didn’t change significantly.

The actual cost of the pension system was reduced substantially by negotiating changes such as a 10-year suspension of cost-of-living raises and the elimination of 5- and 6-percent compounded cost of living adjustments, D’Amico said.

“We got just about as much as we possibly could have without cutting pensions,” said Taveras spokesman David Ortiz. “In a sense, the administration faced a choice: do we push Providence into bankruptcy to give a receiver the ability to cut pensions?

“The mayor believed the cost and collateral damage of pushing Rhode Island’s capital city into bankruptcy was not worth extra pension savings we would have been able to pursue,” Ortiz said.

Said D’Amico: “If we hadn’t done anything, the funded ratio would have been much lower.”

When Raimondo said, “The pension fund in the city of Providence is only 30 percent funded, about the same level as when he [Taveras] took office,” she was only off by one percentage point, according to the most recent audit of the fund. That funded ratio has not increased since Taveras was sworn in on Jan. 3, 2011.

But that percentage was on a downward spiral at the time, so having it stabilize at 31 percent doesn’t necessarily reflect “small changes,” as Raimondo claimed in the debate. And the changes negotiated between Taveras and the city’s unions are intended to gradually increase the funding ratio.

Because the statement is accurate but needs clarification or additional information, we rate it Mostly True.

The pension system continues to occupy center stage in Rhode Island’s race for governor. In one corner is current state Treasurer Gina Raimondo, whose 2011 pension reforms were among the boldest in the country and are the subject of numerous lawsuits from labor groups.

In the other corner in Angel Taveras, the current mayor of Providence who has been critical of the pension system’s investments under Raimondo and has accused the Treasurer of being in bed with Wall Street.

Raimondo released a new campaign ad yesterday – you can watch it above – that responded to Taveras’ claims. The Providence Journal reports:

In a new one-minute TV ad released to the media on Monday morning, Raimondo, the state’s general treasurer, looks into the camera and says of her leading rival in the Democratic primary race for governor:

“I’m Gina Raimondo and you might have heard about Mayor Taveras attacking pension reform, claiming I did it to enrich Wall Street. Nothing could be more wrong.”

“I was 11 years old when my dad lost his job at Bulova. I have never forgotten how hard that was. So when I became treasurer and inherited the pension crisis, I knew if we didn’t face up to the problem a lot of people were going to get hurt. And we couldn’t let that happen” she says in the video.

Raimondo, who is being sued by the state’s public-employee unions, next says: “Our reforms passed by overwhelming majorities in the legislature and, in the end, most of our changes were agreed to by every union except one.”

The Taveras campaign has been extremely critical of the hedge funds investments and accompanying investment fees incurred by the state’s pension system under Raimondo’s watch.

“As a former venture capitalist who raised fees to Wall Street to $70 million, the Treasurer [Raimondo] has taken over $500,000 from the financial industry. The Treasurer received a no bid, secret contract managing taxpayer money that ensured that her venture capital firm was paid whether they made money or not. Rhode Island deserves a governor who has a record of standing up to Wall Street.”

Raimondo has been adamant that most unions were receptive to her reforms. But several union leaders have gone on record to say that is not the case. As the leaders told the Providence Journal:

Leaders of several of the state’s public-employee unions — including Council 94, American Federation of State, County and Municipal Employees — accused Raimondo of misrepresenting their position in the high-stakes pension fight headed for trial next month.

“Our ideas and suggested amendments were ignored. She broke her word about taking care of people with the least amount of pension benefits, in her words: ‘the little guy.’ And she harmed many municipal employees whose pensions were healthy,” Downey said.

Added Paul Reed, president of the Rhode Island State Association of Firefighters: “She never negotiated with us on any of these things.”

Both of those union leaders support Taveras. 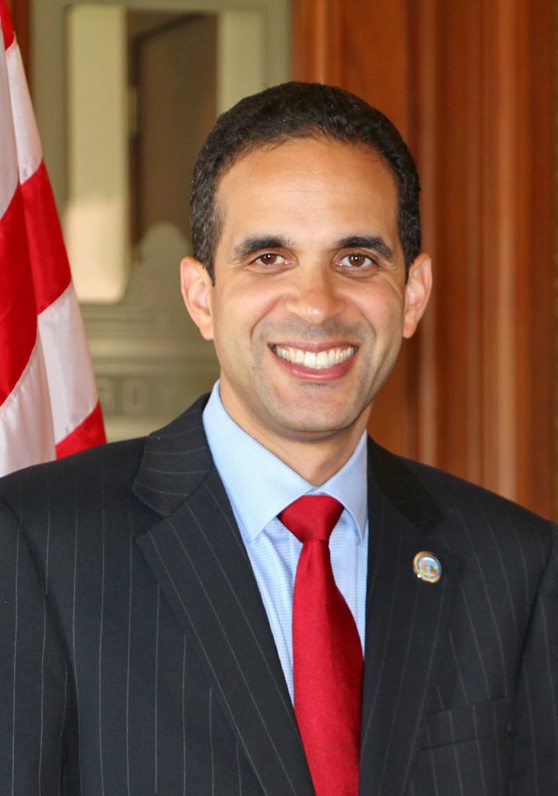 Early in 2013, Providence filed a lawsuit against the actuarial firm, Buck Consultants, that had served as the city’s actuary for the previous 90 years.

It takes a pretty serious falling out to break off such a long-standing relationship, but Providence is alleging that Buck made a serious mistake when crunching the numbers behind the city’s recent set of pension reforms.

When the city was designing its pension reforms, it asked Buck to calculate how much the city would save from various policies, namely the suspension of cost-of-living increases. So that’s what Buck did.

But the city alleges that Buck made serious mathematical errors in its estimations, overstating the city’s savings by $700,000 a year and in turn boosting its pension liabilities by $10.8 million over the next 28 years.

The court case is now underway, and the time has come for Mayor Taveras to be deposed. But Taveras says he needs to wait until after the Sep. 9th gubernatorial primary to answer questions under oath. Buck says “no way.” From the Providence Journal:

The city last week filed an emergency motion for a protective order seeking to postpone until after the primary election Taveras’ questioning under oath about his decisions regarding changes to the city’s retirement system. It asked, too, that U.S. District Chief Judge William E. Smith limit his deposition to three hours, given the “press of city business.”

Buck Consultants LLC — which performed financial analyses for the city since 1920 — argues that Taveras’ deposition is imperative to its defense against the city’s lawsuit.

Buck looks to question Taveras, who it identifies as the central witness in the case, not only about his decision-making in pushing for an ordinance suspending cost-of-living increases for retirees but also statements he has made in the course of his campaign for governor. Buck asserts that its lawyers should be allowed to depose Taveras “while the campaign is ongoing” based on his comments.

“Mayor Taveras is not a mere bystander to this dispute,” Buck writes. “As the City’s highest elected official, he is a critically important witness.”

What could Taveras be worried about? For one, Taveras is saying the he wouldn’t have passed the reforms if he’d known about the math errors.

But Buck accuses Taveras of signing off on the series of reforms after he was aware of the errors.

According to Buck, Taveras is using the actuarial mistakes as a campaign ploy to save face on a policy that took money out of the pockets of many voters.

Taveras and his challenger, Gina Raimondo, have been see-sawing back on forth in the polls since last year.