Deprecated: Methods with the same name as their class will not be constructors in a future version of PHP; WP_Widget_Factory has a deprecated constructor in /home/mhuddelson/public_html/pension360.org/wp-includes/widgets.php on line 544
 Deutsche Bank | Pension360
Skip to content

Deutsche Bank says that after a series of meetings this month with institutional investors, they’ve concluded that CalPERS’ hedge fund exit “has no bearing on most investors commitment to the industry.”

Deutsche Bank prime brokerage notes that hedge funds have been engaged in “extreme protection buying in equities” and said that the recent exit from hedge funds by CalPERS “has no bearing on most investors commitment to the industry.”

After speaking with the institutional investor community regarding their commitment to maintain their hedge fund allocations, Deutsche Bank’s Capital Introductions group reports this positive message that it says was bolstered by recent meetings with Canadian pensions and global insurance companies throughout the month, while a trip to Munich indicated an increase in hedge fund exposure from institutions.

Separate hedge fund observers, meanwhile will be watching numeric asset flow patterns in December and the first quarter of 2015 to determine on an objective basis if there has been a statistical move away from hedge funds.

Even if institutional investors on the whole aren’t moving away from hedge funds, the exit by CalPERS – and the public debate swirling around the investment expenses associated with hedge funds – has forced some hedge funds to reconsider their fee structures. From the Wall Street Journal:

Two titans of the hedge-fund and private-equity world say they are growing more open to reducing fees in the face of rising scrutiny of the compensation paid to managers of so-called alternative investments.

Mr. [John] Paulson [founder of hedge fund firm Paulson & Co.] said he feels “pressure” to act in the wake of “enormous numbers in compensation” for hedge fund managers. Mr. Paulson, 58, earned a reported $2.3 billion last year, counting both fees and the appreciation of his own personal investment in his funds.

“Institutions are becoming a little more demanding…they are putting pressure on the management fee and the incentive fee,” he said Monday during a panel discussion at New York University’s Stern School of Business.

“There are a lot of private-equity managers out there who can make a lot of money before they return a dime to investors,” Mr. Landy said. “Most of the pressure [to reduce fees] has been on the actual annual management fee.”

Neither he nor Mr. Paulson, however, were too concerned about any widespread threats to their businesses.

“We came out relatively unscathed from the crisis. We’re doing pretty much the same things we did as before [with] very little restrictions on how we invest the money,” Mr. Paulson said. 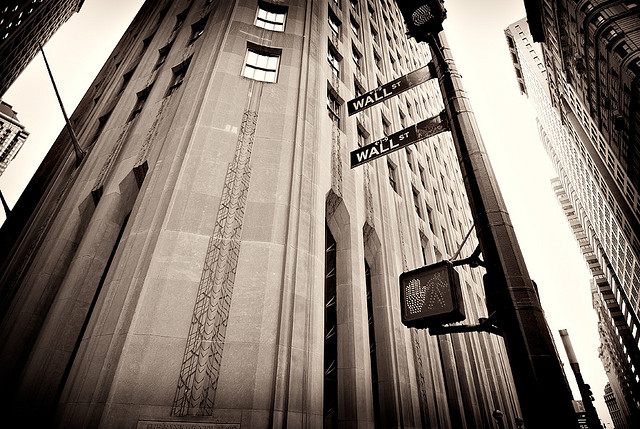 No one ever said Wall Street wasn’t creative.

Several firms are selling securities backed by longevity risk—the risk that retirees receiving benefits will live longer than expected and thus incur a higher cost on their retirement plan. More from Institutional Investor:

The roots of this nascent market date back to 2006, when small monoline insurance companies such as U.K.-based Lucida (purchased by Legal & General in June 2013) and Paternoster (bought by Goldman Sachs Group in 2011) began taking longevity risk off European pension funds through bulk annuity buyouts.

These buyouts entail a company selling pension assets earmarked for all or some of its plan participants. The assets are converted to annuities that the sponsor can keep on its books or off-load to the insurer.

Banks build longevity derivatives products using risk models provided by firms like Newark, California–based Risk Management Solutions (RMS). They’ve closed a dozen such deals, but the customized structure can be tough for investors to grasp. Deutsche Bank is focused on creating a path into the capital markets, according to Paul Puleo, global head of pension and insurance risk markets in New York.

In December 2013, Deutsche created longevity experience options, or LEOs, a more standardized product tailored to capital markets participants. Longevity derivatives resemble the older catastrophe bond, or insurance-linked security (ILS), market, which packages insurance against natural disasters. A key difference between longevity insurance derivatives and cat bonds is that there are now a number of hedge funds dedicated to the ILS market.

Who buys these securities? It’s been mostly life insurers so far. But firms anticipate other interested parties will soon be buying up these instruments, as well. From Institutional Investor:

Although it’s been difficult for capital markets participants to compete with such natural buyers, long-term investors like sovereign wealth funds may find the portfolio diversification attractive. Ultrahigh-net-worth investors might also be interested, says Peter Nakada, Hoboken, New Jersey–based head of the life risks and capital markets units at RMS. These products can be viewed as a social good because they provide insurance for people who may not have enough cash in retirement, Nakada posits: A wealthy individual makes good money now by purchasing them; in the unlikely event that retirees exhaust their annuities, the monetary outlay can provide financial relief to the needy elderly.

The firms selling these instruments seem to realize the market is “immature” and it will take investors a while to warm up to them. But several industry sources told Institutional Investor they see longevity derivatives as a diversification tool and a good fit for portfolios of endowment funds and even high-worth individual investors.