Deprecated: Methods with the same name as their class will not be constructors in a future version of PHP; WP_Widget_Factory has a deprecated constructor in /home/mhuddelson/public_html/pension360.org/wp-includes/widgets.php on line 544
 Pennsylvania pension debt | Pension360
Skip to content

Pennsylvania Gov. Tom Wolf, in stark contrast to his predecessor Tom Corbett, has been adamant that he is not on board with any sweeping changes to the state’s pension system – particularly the switch to a 401(k)-style system favored by many of the state’s Republican lawmakers.

More from the Citizen’s Voice:

State Rep. Mike Tobash, R-Pottsville, who drafted pension reform legislation in the last House session, said he thinks both houses of the Legislature are ready to deal with the estimated $47 billion to $60 billion debt in the state pension fund.

“The senate has come out and said it is their No. 1 issue,” Tobash said. “I think House Republican leadership feels exactly the same way. This $50 billion-plus debt is crippling us in a number of ways. It is crushing our school districts. If we properly dissect it, and we come forward with a number of bills, we will be better able to answer the problem in the minds of the different stakeholders and really get something accomplished.”

Tobash said the Legislature is attacking this issue from its multiple points.

“A series of bills being presented attack it from different areas,” he said. “One bill is a straight shift from defined benefit to defined contribution, which is more like the private sector. I think it is an optimum plan we are going to bring to the fore. We also have to look at the expense side.”

Tobash said legislators are looking at four areas: Existing member concessions, “to help work our way out of this debt, like increasing employee contributions;” the way the state delivers benefits “that are enhanced. Maybe we can ratchet them back a little bit;” early buyouts. “These are people who are vested but not collecting. Maybe we can buy them out and realize some long-term savings,” and finally, dedicated revenue. “I think it is important for analysts to take a look at Pennsylvania and see we have a commitment to pay down this debt.”

Rep. Tobash is the author of legislation, introduced in the last session, that would shift new hires into a 401(k)-style system.

Pennsylvania lawmakers this week released two dueling shale tax proposals. One of those proposals calls for an 8 percent extraction tax, with a significant portion of the revenue going towards the state-level pension systems.

Setting the bar on the high end, Democratic state Sens. Art Haywood, Vincent Hughes and Larry Farnese focused on putting money back in the state’s education coffers with their plan for an 8 percent shale tax. Texas – the only state to produce more shale gas than Pennsylvania – has an extraction tax of 7.5 percent.

“Some people are going to say that it’s extreme,” said Haywood. “Eight percent is not as extreme as zero, which is what we have now.”

With that plan, the state would raise more than a billion dollars in revenue in the first year, Haywood said. Off the top, $100 million would go to environmental concerns, with the rest of that revenue split 60 percent for education and 40 percent to defray pension costs.

If the lawmaker’s projections are to be trusted, the tax would net over $360 million for the pension systems in its first year.

Pennsylvania’s state-level pension debt amounts to around $47 billion, according to the state’s budget office.

Pennsylvania is shouldering $47 billion of pension debt, according to the Governor’s Office, and that figure doesn’t include the unfunded liabilities of the state’s municipal pension systems.

No easy solution awaits. But Thomas A. Firey, managing editor of economics journal Regulation, writes on Philly.com that a “buyback” program is worth considering.

The deficits have prompted calls to cut benefits, but workers and their unions reply that these promises were made in good faith – and written into contracts. It’s hard to disagree. Also hard to dispute are the concerns of state residents who point to an already heavy tax burden that makes it hard to provide for their families, let alone public employees. Finally, there are those who worry that essential services could be cut in any pension fix.

Harrisburg should create a program that would allow individual state and local public employees to voluntarily sell back some of their pension benefits in exchange for cash. If engineered correctly (perhaps using an auction mechanism), the overall savings to taxpayers could be very large, even if the state has to borrow money for the payouts.

If this program were implemented, everyone would win. Workers who sign up would get more immediate compensation, while non-participating members would see no change in their retirement benefits. The long-term pension cost to taxpayers would be reduced, and lawmakers would be under less pressure to cut government programs.

The new governor, state legislators, and union leaders should consider this option if they are serious about addressing the commonwealth’s pension crisis.

Read the full piece, including a description of a similar initiative’s fate in Illinois, here. 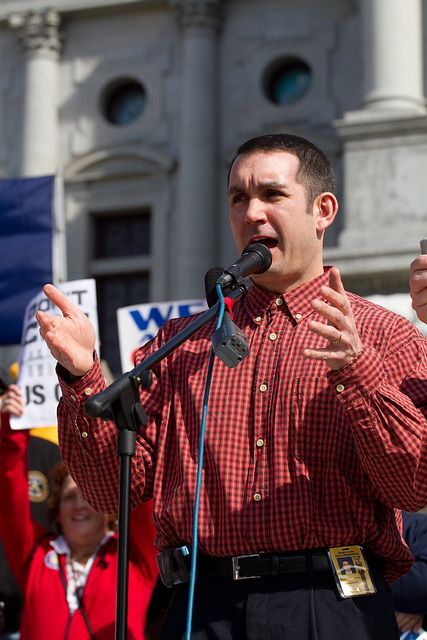 The majority of the state’s 1,200 municipal pension plans were funded at 90 percent or higher, according to the Auditor General’s office.

But 562 of the plans were classified as “distressed”.

Pittsburgh is one of 562 Pennsylvania municipalities with distressed pension funds, according to figures Auditor General Eugene DePasquale released Wednesday.

About 1,200 municipalities in Pennsylvania administer their own pension plans. Collectively, they were $7.7 billion underfunded through 2012, up from $6.7 billion the year before.

“It’s gone up by $1 billion with no sight of action yet by the Legislature,” DePasquale said. “There’s no way around it; we need a statewide solution.”

Most of the shortfall was in Philadelphia, where the city’s unfunded liabilities surpass $5.3 billion, according to July 2013 figures. Pittsburgh was the second-highest as of January 2013 at about $484 million.

DePasquale recommends some short-term fixes. Governments should prohibit employees from “spiking” their pensions by working extra overtime, increase age and service requirements in accordance with increased life expectancies, and ensure all plans require members to contribute.

The state’s auditor general says he will “continue to beat this drum” until lawmakers come up with a way to make municipal pension systems more sustainable.

Since 2012, the unfunded liabilities of Pennsylvania’s worst-funded municipal pension systems have increased by $1 billion, according to the state’s top auditor.

The increase in liabilities comes despite years of rising stock market values.

The state’s auditor general says he will “continue to beat this drum” until lawmakers come up with a way to make municipal pension systems more sustainable.

A continued failure by state lawmakers to act is allowing a growing problem of municipal pension debt in Pennsylvania to get worse, state Auditor General Eugene DePasquale said Wednesday.

DePasquale renewed the warning he gave a year ago, saying that municipal pension debt in the billions of dollars is putting municipalities and retiree benefits on shaky ground.

DePasquale said that municipal governments with the weakest pension plans were underfunding them by $7.7 billion through 2012, an increase of $1 billion after DePasquale’s office analyzed two years of new data.

That increase took place during a time when the economy was growing and stock market values were rising, DePasquale noted. Historically, the pension plans of police and firefighters have been responsible for most of the debt.

Nearly 70 percent of that $7.7 billion debt, or $5.3 billion, belonged to Philadelphia, according to DePasquale’s office. Pittsburgh was second with $485 million. Among Pennsylvania’s cities, Scranton had the worst funding ratio at 23 percent.

DePasquale warned that, unless changes are made, rising pension debt that forces a municipality into bankruptcy could mean benefit reductions for retirees. Some municipalities will have to raise taxes or lay off police and firefighters, he said.

“Some of them may be forced to do both,” DePasquale said.

The majority of the state’s 1,200 municipal pension plans were funded at 90 percent or higher, according to the Auditor General’s office.

But some plans are so underfunded that they threaten to bankrupt the municipalities with their unfunded liabilities.