Deprecated: Methods with the same name as their class will not be constructors in a future version of PHP; WP_Widget_Factory has a deprecated constructor in /home/mhuddelson/public_html/pension360.org/wp-includes/widgets.php on line 544
 Pension Consulting Alliance | Pension360
Skip to content 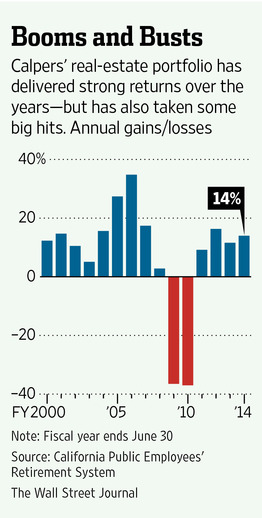 CalPERS has seen strong real estate returns since 2011. But a consultant for the pension fund warns in a new report that the consistent double-digit returns are unlikely to continue.

[The report, from Pension Consulting Alliance, can be read here, or at the bottom of this post.]

The PCA report, which is contained in agenda materials for CalPERS’ Nov. 17 investment committee meeting, said sustaining those returns is unlikely because of a challenging and highly competitive investment market.

The report cites increased competition from sovereign wealth funds, high-net-worth investors and other large direct investors in real estate as among the reasons for the potentially declining results. It says persistently low interest rates are fueling the demand for income-producing assets.

In 2011, CalPERS changed the focus of its real estate program to focus on investing in income-producing properties — and away from opportunistic real estate — after suffering massive losses following the crash of the real estate market.

CalPERS spokesman Brad Pacheco said in an e-mail: “We recognize that recent high returns will be difficult to achieve in the current real estate market. Our goals now are to diversify portfolio risk and generate steady, modest gains.”

CalPERS manages $25.6 billion in real estate assets, and is planning to expand its real estate portfolio by 27 percent by 2016.

Over at Naked Capitalism, Yves Smith has posted an extensive analysis of the October 13th meeting of CalPERS’ investment committee.

The meeting gets interesting when one committee member asks the consultants about “evergreen fees”.

The board is presented with three candidates screened by CalPERS staff. Two, Meketa Investment Group and Pension Consulting Alliance, are established CalPERS advisors. There’s one newbie candidate, Albourne America. Each contender makes a presentation and then the board gets a grand total of 20 minutes for questions and answers for each of them. This isn’t a format for getting serious.

To make a bad situation worse, most of the questions were at best softballs. For instance, Dana Hollinger asked what the consultants thought about the level of risk CalPERS was taking in private equity program. Priya Mathur asked if the advisors could do an adequate job evaluating foreign managers with no foreign offices. Michael Bilbrey asked how the consultants kept from overreacting to positive or negative market conditions.

One board member, however, did manage to put the consultants on the spot. The answers were revealing, and not in a good way. The question came from J.J. Jelincic, where he asks about a particular type of abusive fee, an evergreen fee.

Evergreen fees occur when the general partner makes its portfolio companies, who are in no position to say no, sign consulting agreements that require the companies to pay fees to the general partners. It’s bad enough that those consulting fees, which in industry parlance are called monitoring fees, seldom bear any resemblance to services actually rendered. Over the years, limited partners have wised up a bit and now require a big portion of those fees, typically 80%, to be rebated against the management fees charged by the general partners.

So where do these evergreen fees come in? Gretchen Morgenson flagged an example of this practice in a May article. The general partner makes the hapless portfolio company sign a consulting agreement, say for ten or twelve years. The company is sold out of the fund before that. But the fees continue to be paid to the general partner after the exit. Clearly, the purchase price, and hence the proceeds to the fund, will have been reduced by the amount of those ongoing fees, to the detriment of the fund’s investors. And with the company no longer in the fund, it is almost certain to be no longer subject to the fee rebates to the limited partners.

Jelincic describes the how the response said that the fees are shared only if the fund has not fully exited its investment in the portfolio company. Jelincic asks if that’s an example of an evergreen fee, and if so, what CalPERS should do about it.

Naked Capitalism on the consultants’ responses:

The response from Albourne is superficially the best, but substantively is actually the most troubling. The first consultant responds enthusiastically, stating that CalPERS is in position to stop this sort of practice by virtue of having a “big stick” as the SEC does. He says that other funds aren’t able to contest these practices.

The disturbing part is where he claims his firm was aware of these practices years ago by virtue of doing what they call back office audits. That sounds implausible, since the rights of the limited partners to examine books and records extends only to the fund itself not to the general partner or the portfolio companies (mind you, some smaller or newer funds might consent). But the flow of the fees and expenses that the limited partners don’t know about go directly from the portfolio company to the general partner and do not pass through the fund. How does Albourne have any right to see that?

But if they somehow really did have that information, the implication is even worse. It means they were complicit in the general partners’ abuses. If they really did know this sort of thing and remained silent, whose interest were they serving? It looks as if they violated their fiduciary duty to their clients.

The younger Albourne staffer claimed a lot of the fees were disclosed in footnotes and that most limited partners have been too thinly staffed or inattentive to catch them. That amounts to a defense of the general partners and if Albourne really did know about these fees, Albourne’s inaction.

However, The SEC doesn’t agree with that view and they have the right to do much deeper probes than Albourne does. From SEC exam chief Drew Bowden’s May speech:

[A]dvisers bill their funds separately for various back-office functions that have traditionally been included as a service provided in exchange for the management fee, including compliance, legal, and accounting — without proper disclosure that these costs are being shifted to investors.

Meketa was clearly not prepared to field Jelincic’s question and waffled. They effectively said they thought the fees were generally permissible but more transparency was needed. They threw it back on CalPERS to be more aggressive, particularly on customized accounts, and urged them work with other large limited partners.

Pension Consulting Alliance was a tad less deer-in-the-headlights than Meketa but in terms of substance, like Albourne, made some damning remarks. The consultant acted if evergreen fees might be offset, which simply suggests he is ignorant of the nature of this ruse. He said general partners are looking to do something about it, implying they were intending to get rid of them, but said compliance was inconsistent. Huh? If the funds intend to stop the practice, why is compliance an issue? This is simply incoherent, unless you recognize that what he is actually describing is unresolved wrangling, not any sort of agreement between limited and general partners that charge these fees on this matter. He also said he would recommend against being in funds that have evergreen fees. But there was no evidence he had planned to be inquisitive about them before the question was asked.

You’ll notice that all of the answers treat the only outcome as having CalPERS, perhaps in concert with other investors, be more bloody-minded about evergreen and other dubious fees. You’ll notice no one said, “Yes, you should tell the SEC this stinks. You were duped. You should encourage the SEC to fine general partners who engaged in this practice and encourage the SEC to have those fees disgorged. That would to put an end to this. Better yet, tell the general partners you’ll do that if they don’t stop charging those fees and make restitution to you. That’s the fastest way to put a stop to this and get the most for your beneficiaries.” Two of the three respondents said CalPERS is in a position to play hardball, so why not take that point of view to its logical conclusion?

But this is what passes for best-of-breed due diligence and supervision in public pension land. Imagine what goes on at, say, a municipal pension fund.

California’s pension reforms are designed to fully fund CalSTRS in the next 35 years. But that timeline assumes the fund will meet or exceed its assumed rate of return – 7.5 percent – year in and year out.

But what if CalSTRS doesn’t meet its investment return targets?

That was the topic of the fund’s most recent investment board meeting. Reported by Chief Investment Officer:

CIO Chris Ailman posed that question [of failing to meet return expectations] during the fund’s September 5 investment board meeting. A number of top asset managers and economists have predicted market returns below historic averages for the coming years, and CalSTRS has chosen to confront that possibility head-on.

Economic growth risk is the foremost factor determining asset returns, according to Pension Consulting Alliance (PCA), CalSTRS’ primary investment adviser. Weak growth brought on by cyclical recessions, another financial crisis, or geopolitical events pose the largest threat to the fund’s short-term returns. In turn, these draw-down events present the likeliest path to sub-7.5% returns over the long term and, taken to an extreme, plan insolvency.

“Mitigating short-term drawdown risk may improve the likelihood that the long-term pension reform measures will succeed,” PCA said in its presentation. But CalSTRS faces a “key tradeoff” in hedging. “Addressing major crisis risks could push the long-term expected rate of return lower,” the consultancy continued.

During the discussion, PCA Founder Allan Emkin, Ailman, and others expressed trepidation over equities’ long bull run and lofty valuations. According to research by Investment Officer Josh Diedesch, the US stock market’s price-to-earnings ratio (20) suggests annual returns below or barely surpassing the 7.5% threshold for the next five years.

As Ailman put it during his opening CIO report, the “US bull market is getting long in the tooth.”

The topic will be broached again at the next board meeting, according to Chief Investment Officer.