Deprecated: Methods with the same name as their class will not be constructors in a future version of PHP; WP_Widget_Factory has a deprecated constructor in /home/mhuddelson/public_html/pension360.org/wp-includes/widgets.php on line 544
 kentucky pension system | Pension360
Skip to content

Pension360 has previously covered the story of the Kentucky-based non-profit, Seven Counties Services, leaving the Kentucky Retirement System due to the increased contributions that would have been required from the group to stay in the system.

A judge ruled last month that Kentucky-based non-profit Seven Counties Services could legally remove itself from the state’s pension system. But lawmakers weren’t happy with the pension obligations—allegedly to the tune of $90 million—that the organization was leaving behind.

In response, lawmakers chose not to renew Seven Counties’ contract with the state.

“This sends a signal that we are not happy with an agency that contracts with the state and leaves us a bill for $90 million,” said Rep. Brent Yonts, D-Greenville.

But at least one lawmaker says Seven Counties is getting the short end of the stick in the situation.

She also defended the non-profit against claims that they were leaving the system with a massive lump of pension debt.

“I think that the $90 million is in dispute as well. Seven Counties has made every single contribution required of them to this point — before they had to file for bankruptcy,” Adams said. “The problem is we have these agencies that are so vital to our most vulnerable citizens, because you can’t pay 40 cents of every dollar into a pension system and think they’re going to be able to keep serving the most vulnerable in our communities.”

Watch the full video of the exchange above.

A great refresher of the lead-up to this situation, from Leo Weekly:

Seven Counties was one of many nonprofits allowed to join KRS over the past few decades, hoping to lure qualified employees who would overlook meager salaries due to the security of a good pension after retirement.

Up until 2006, this arrangement appeared to work, as the employer contribution rate for pensions was only 5.9 percent of payroll. However, after a decade of Frankfort severely underfunding the required employer contribution, the growing unfunded liability of KRS — especially the Kentucky Employee Retirement System, which houses those nonprofits and is now the worst-funded public pension in the country — led to ballooning costs. By 2012, the contribution rate grew to 20 percent; last year it was 27 percent, and for the current year, it is almost 39 percent.

While the pension reform legislation SB 2 passed in 2013 aimed to solve this crisis by requiring full payment by employers, for nonprofits such as Seven Counties, it only exacerbated the problem. Unable to make such pension payments and stay afloat financially, they declared bankruptcy and filed suit to pull out of KRS. In May, the judge ruled in their favor, saying that the state is obligated to pay out KRS pension benefits to the employees of Seven Counties who paid into it.

Seven Counties Services was granted leave from the pension system in June through bankruptcy proceedings as their portion of the pension payments grew to nearly 40 percent of payroll. In the 2014 budget process the General Assembly provided $19 million to other mental health agencies — not counting Seven Counties — to help them meet increased pension costs.

Pension360 will keep you updated on subsequent developments.

Last month, a judge ruled that Kentucky-based non-profit Seven Counties Services could legally remove itself from the state’s pension system. But lawmakers aren’t happy with the pension obligations—allegedly to the tune of $90 million—that the organization is leaving behind.

Seven Counties, a group that provides fostering and other family services, filed for bankruptcy in 2013, and as part of the proceedings they were hoping to get out of Kentucky’s pension system to avoid increasing contributions. The judge allowed the maneuver.

But now, angry lawmakers seem to not want the organization in the state at all. They chose not to renew Seven Counties’ contract with the state. From the Courier-Journal:

The contract provided family preservation services in the Louisville area, using in-home counselors to help families in crisis with the aim of keeping children at home or reuniting them with parents.

It will remain effective through Oct. 31 as families and children are transitioned, and officials “will move with all due haste” to execute a contract with a new provider, according to a letter from the Cabinet for Health and Family Services.

Seven Counties has provided the services for decades, and warned that cancelling the contract would harm at-risk children and around 300 families that participate in the program.

Lawmakers are concerned that if the Seven Counties ruling stands, other state agencies will rush to get out of the state’s pension system. That would mean less contributions coming into the system.

“The actuaries have determined it would increase the contribution rate over a 20 year period, it would ratchet up a little bit each year over 20 years about 6.5 percent, which would amount to about $2.4 billion of additional moneys over the 20 year period that would have to be picked up by the remaining employers in the system,” Thielen said.

In that vein, the contract non-renewal sets a precedent for other groups looking to follow in Seven Counties’ footsteps: if you leave the pension system, you leave the state too. 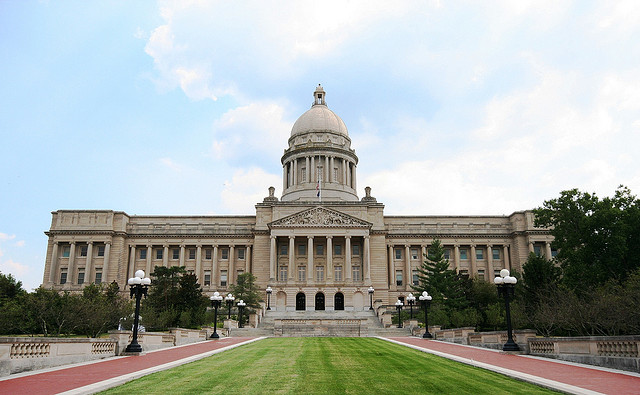 It’s early yet, but a new analysis of Kentucky’s recent pension overhaul says that the reforms are working—at least for some.

The study, released by the Urban Institute today, shows that the state’s reform measures will result in more benefits for most workers, although the most experienced workers in Kentucky’s system are not likely to benefit at all.

Researchers concluded that the shift will provide at least as much lifetime benefit to 55 percent of vested employees and that most workers with up to 24 years of service will fare better compared to the traditional plan.

But, the report notes, most workers with more than 25 years of service, or those hired later in life, would benefit more from the traditional plan. And employees with 30 years or more will receive about $180,000 less under the change, it said.

The reform measures, signed into law last year, switch public employees from a defined-benefit plan to a hybrid cash-balance plan.

A recap of the new plan:

The state’s traditional retirement plan determined pension benefits based on an employee’s salary. The cash balance approach guarantees a 4 percent return while basing additional benefits on investment performance at Kentucky Retirement Systems. But the change only applies to employees hired after Jan. 1.

Proponents argue that it will help spread out investment risks between government and workers and save the state money during economic downturns.

Draine said the report shows 90 percent of the benefits went to only a quarter of employees under the old system, while that number drops to 66 percent with the reforms.

But critics contend that it makes retirement income less predictable for public employees.

Kentucky is also required under the law to make its full Actuarially Required Contribution, which it frequently skipped out on over the past decade. That comes at a cost of about $100 million annually, which was paid for by eliminating COLAs and increasing the state’s personal income tax.

As of 2011, Kentucky’s retirement system has the 7th highest unfunded pension liability in the country. The Kentucky Employees Retirement System is only 50.5% funded.